I made surprisingly good ECG from a single op-amp and 5 resistors! An ECG (electrocardiograph, sometimes called EKG) is a graph of the electrical potential your heart produces as it beats. Seven years ago I posted DIY ECG Machine on the Cheap which showed a discernible ECG I obtained using an op-amp, two resistors, and a capacitor outputting to a PC sound card’s microphone input. It didn’t work well, but the fact that it worked at all was impressive! It has been one of the most popular posts of my website ever since, and I get 1-2 emails a month from people trying to recreate these results (some of them are during the last week of a college design course and sound pretty desperate). Sometimes people get good results with that old circuit, but more often than not the output isn’t what people expected. I decided to revisit this project (with more patience and experience under my belt) and see if I could improve it. My goal was not to create the highest quality ECG machine I could, but rather to create the simplest one I could with emphasis on predictable and reproducible results. The finished project is a blend of improved hardware and custom cross-platform open-source software (which runs on Windows, Linux, and MacOS), and an impressively good ECG considering the circuit is so simple and runs on a breadboard! Furthermore, the schematics and custom software are all open-sourced on my github!

Here’s a video demonstrating how the output is shown in real time with custom Python software. The video is quite long, but you can see the device in action immediately, so even if you only watch the first few seconds you will see this circuit in action with the custom software. In short, the amplifier circuit (described in detail below) outputs to the computer’s microphone and a Python script I wrote analyzes the audio data, performs low-pass filtering, and graphs the output in real time. The result is a live electrocardiograph!

The circuit is simple, but a lot of time and thought and experimentation went into it. I settled on this design because it produced the best and most reliable results, and it has a few nuances which might not be obvious at first. Although I discuss it in detail in the video, here are the highlights:

For those of you who would rather see a picture than a schematic, here’s a diagram of how to assemble it graphically. This should be very easy to reproduce. Although breadboards are typically not recommended for small signal amplification projects, there is so much noise already in these signals that it doesn’t really matter much either way. Check out how good the signals look in my video, and consider that I use a breadboard the entire time. 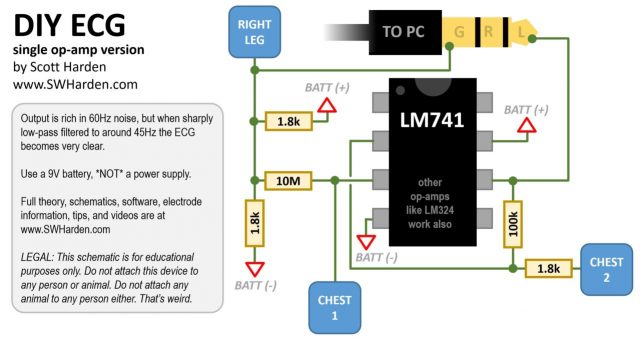 The most comfortable electrodes I used were made for muscle simulators. A friend of mine showed me some muscle stimulator pads he got for a back pain relief device he uses. As soon as I saw those pads, I immediately thought they would be perfect for building an ECG! They’re a little bit expensive, but very comfortable, reusable, last a long time, and produce brilliant results. They also have 3.5 mm (headphone jack) connectors which is perfect for DIY projects. On Amazon.com you can get 16 pads for $11 with free shipping. I decided not to include links, because sometimes the pads and cords are sold separately, and sometimes they have barrel connectors and sometimes they have snap connectors. Just get any adhesive reusable electrodes intended for transcutaneous electrical nerve stimulation (TENS) that you can find! They should all work fine. 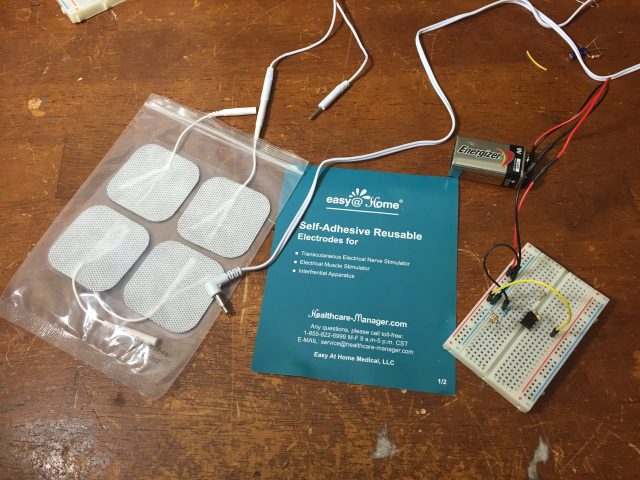 You can make your own electrodes for $0.03! Okay that’s a terrible joke, but it’s true. I made not-awful electrodes by soldering wires to copper pennies, adding strength by super-gluing the wire to the penny, and using electrical tape to attach them to my chest. Unless you want a tattoo of an old guy’s face on your torso, wait until they cool sufficiently after soldering before proceeding to the adhesion step. I suspect that super gluing the penny to your chest would also work, but please do not do this. Ironically, because the adhesive pads of the TENS electrodes wear away over time, the penny solution is probably “more reusable” than the commercial electrode option.

Notes on filtering: Why didn’t I just use a hardware low-pass filter?

Notes on software: This a really cool use of Python! I lean on some of my favorite packages numpy, scipy, matplotlib, pyqrgraph, and PyQt4. I’ve recently made posts describing how to perform real-time data graphing in Python using these libraries, so I won’t go into that here. If you’re interested, check out my real-time audio monitor, notes on using PlotWidget, and notes on using MatPlotLib widget. I tried using PyInstaller to package this project into a single .EXE for all my windows readers who might want to recreate this project, but the resulting EXE was over 160MB! That’s crazy! It makes sense considering packagers like PyInstaller and Py2EXE work by building your entire python interpreter and all imported libraries. With all those fun libraries I listed above, it’s no wonder it came out so huge. It may be convenient for local quick-fixes, but not a good way to distribute code over the internet. To use this software, just run it in Python. It was tested to work with out-of-the-box WinPython-64bit-3.5.2.1 (not the Qt5 version), so if you want to run it yourself start there.

Notes on safety. How safe is this project? I’m conflicted on this subject. I want to be as conservative as I can (leaning on the side of caution), but I also want to be as realistic as possible. I’m going to play it safe and say “this may not be safe, so don’t build or use it”. As an exercise, let’s consider the pros and cons:

Improving safety through optical isolation: The safety of this device may be improved (albeit with increased complexity) through the implementation of opto-isolators. I may consider a follow-up post demonstrating how I do this. Unlike digital signals which I’ve optically isolated before, I’ve never personally isolated analog signals. Although I’m sure there are fully analog means to do this, I suspect I’d accomplish it by turning it into a digital signal (with a voltage-to-frequency converter), pulsing the output across the optoisolator, and turning it back into voltage with a frequency-to-voltage converter or perhaps even a passive low-pass filter. Analog Devices has a good write-up about optical isolation techniques.

Do you have comments regarding the safety of this device? Write your thoughts concisely and send them to me in an email! I’d be happy to share your knowledge with everyone by posting it here.

Did you build this or a device similar to it? Send me some pictures! I’ll post them here.

LEGAL: This website is for educational purposes only. Do not build or use any electrical devices shown. Attaching non-compliant electronic devices to your body may be dangerous. Consult a physician regarding proper usage of medical equipment.